Fernhill Adventure made it two in a row with a win in the O/I at Aston. This time it was a bit closer as he won by just one mark, but still seriously impressive and what a horse he is! He did a 27 dressage with a few mistakes as he was a bit lively compared to Burgham – probably just getting fitter and remembering what it is all about! He jumped a double clear and made it feel very easy.

My own horse Rienroe Lucky Ranger was looking like he could have followed Biscuit in his winning ways, with a 26 dressage in his Intermediate section. However, as horses love to surprise us, he was completely over-excited in his show-jumping and rolled three rails – very unlike him. Something must have set him off but I have absolutly no idea what! One of those things and he did make up for it with a fantastic round xc so was vaguely forgiven!

They will both go to Somerford Park next and then Millstreet for the CIC*** and CIC** respectively.

I then managed to really upset Jimmy (Vaguely North) the next day by getting him up at 5.30 to go to Hartpury to do the CIC*** dressage test in the pouring rain. All the things he hates – getting up early , dressage and rain. And then very unfairly, I didnt‘ let him stay for the fun jumping phases! He ran so well at Burgham and didn’t need another run as he is better fresh, but the test was good practise. His mark of 47 was disappointing as I thought the test was nearer a low 40s, still with a few mistakes which I could have done better. However it was lashing with rain, and I think his ears were a bit too low trying to avoid it, which would have dropped us the marks. However- Blair in September- law of averages suggests my effort to do dressage in rain should be good practise! 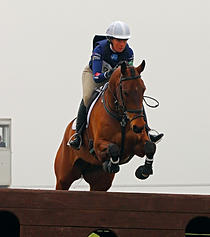