They report in the Journal of Experimental Biology that this pattern of narrow stripes makes zebras „unattractive“ to the flies.

„We started off studying horses with black, brown or white coats,“ explained Susanne Akesson from Lund University, a member of the international research team that carried out the study.

„We found that in the black and brown horses, we get horizontally polarised light.“ This effect made the dark-coloured horses very attractive to flies.

Dr Akesson and her colleagues found that horseflies, or tabanids, were very attracted by these „flat“ waves of light.

Having discovered the flies‘ preference for dark coats, the team then became interested in zebras. They wanted to know what kind of light would bounce off the striped body of a zebra, and how this would affect the biting flies that are a horse’s most irritating enemy.

„We created an experimental set-up where we painted the different patterns onto boards,“ Dr Akesson told BBC Nature. 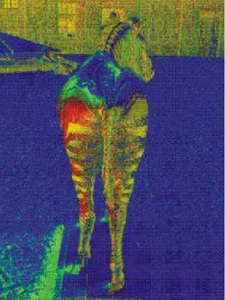 „We put insect glue on the boards and counted the number of flies that each one attracted,“ she explained.

The striped board that was the closest match to the actual pattern of a zebra’s coat attracted by far the fewest flies, „even less than the white boards that were reflecting unpolarised light,“ Dr Akesson said.

„That was a surprise because, in a striped pattern, you still have these dark areas that are reflecting horizontally polarised light.

„But the narrower (and more zebra-like) the stripes, the less attractive they were to the flies.“

To test horseflies‘ reaction to a more realistic 3-D target, the team put four life-size „sticky horse models “ into the field – one brown, one black, one white and one black-and-white striped, like a zebra.

Prof Matthew Cobb, an evolutionary biologist from the University of Manchester pointed out that the experiment was „rigorous and fascinating“ but did not exclude the other hypotheses about the origin of zebras‘ stripes.

„Above all, for this explanation to be true, the authors would have to show that tabanid fly bites are a major selection pressure on zebras, but not on horses and donkeys found elsewhere in the world… none of which are stripy,“ he told BBC Nature.

„[They] recognise this in their study, and my hunch is that there is not a single explanation and that many factors are involved in the zebra’s stripes.