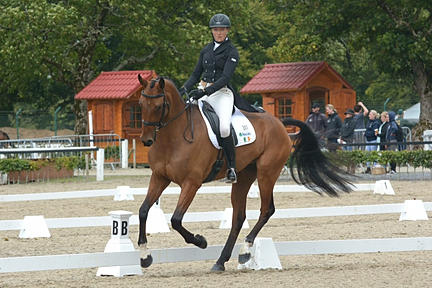 What a venue and what a competition. The course at Millstreet was the most beautiful I have ever ridden around and I was delighted  to be there for its inaugural three star event.

The weekend could only have gone better if Jesse Campbell hadn’t turned up! He was on superb form, winning both the CIC*** and CIC** though I was close behind with a 2nd in the two star with my own Rienroe Lucy Ranger, and 3rd and 6th in a very competitive three star with Fernhill Adventure and Wasting Light respectively.

The horses were on superb form and couldn’t have performed better. Fernhill Adventure is an out and out star following up his hat trick of wins with an impressive third here, beaten by two four star horses. He did an amazing test and jumped a super clear show jumping, with only 7 time around a very tightly timed cross country course. I was early to go and probably could have shaved a few seconds off if I had been later to go, but with Blenheim as his main aim it was the perfect prep run, and a super result all the same.

Wasting light was one of the youngest in the class at 8 years old and was unbelievably impressive to finish 6th in a high class field. He scored 44 in the dressage and jumped a super round, only to have the last fence down where he showed his inexperience jumping into the crowd and just lost some concentration. His cross country was out of this world and confirms my belief that he is a real four star horse.

My own Rienroe (Floyd) followed up his good Somerford form (4th in the intermediate) to finish 2nd in the CIC**, a very strong class. I do think that he is a top class horse who is improving with every outing.

It was a really fun weekend, with Biscuit’s owner’s Richard Last and Sally Biddulph making the trip over, (and treating us to a gorgeous dinner in the local Longueville House on the Friday night!) as well as John Forde, known to all as Skee, who co-owns Archie.  He wouldn’t have missed it for the world as Millstreet is somewhat of a home from home for him. He proudly told us that he has been going to the jumping show there for sixty-four years!

I can’t praise the event highly enough- the cross-country course was out of this world, and having had a chat with Noel C Duggan who has high hopes for the future, I don’t think it will be long before we have a top class four star event in Ireland!