The start of the season has gone smoothly, and luckily my planned events, except for poor Pontispool, have all managed to run with excellent going. 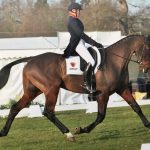 Bobby has progressed successfully to 4 star level having had a great weekend at Belton Horse Trials where he felt brave and confident. His next event was the 4 star 2 weeks later at Burnham Market, but sadly he felt uncharacteristically flat in the dressage and showjumping, so I decided not to run him across country. I gave him a quiet week during which he picked up so ran him the following weekend at Bicton. He was definitely feeling better as was uncharacteristically jolly!! But I had a fabulous ride across country which was great.

The lovely Chatsworth is Bobby’s next event. Tilly, my homebred 5 yr old, did her first ever BE event at Bicton (BE 90 HC). It is such a milestone to get to this stage with a home-bred….. especially as she led the dressage and then went on to jump a double clear…. hurrah!! She went straight on to do the BE100 at Port Eliot yesterday where she again led the dressage and jumped another double clear, rather wobbly at times, but she is naturally very brave and scopey – clever girl!
Even at my ripe old age I strive to improve and love going for lessons. Ferdi Eilberg helps me on the flat and I have been for a few jumping lessons with Ros Bevan who has been very helpful.

Having got on my land with my Logic roller earlier than normal, the fields are looking good…especially as I have used Logic’s spring tine Pro-Harrow which pulls out any old grass and moss which has really promoted fresh growth.,

I’m thrilled to say that Amerigo Saddlery have started to sponsor me….. they make the most gorgeously classy saddles, comfortable for horse and rider.

The young stock have picked up with the spring grass coming through. It’s this time of year I get the 2 yr old colts gelded, when the mud has dried up but before the flies come out in force.

Tess is now nearly 3 weeks overdue, I think she is waiting until I go to Badminton!

Badminton is next week… Emily and Dargun have had a successful preparation, and so now its everything crossed for the week ahead. I had to go up to Badminton to do the live draw for Mitsubishi mid April, and pulled Emily out as no. 21….. so she will have a Thursday morning dressage. As well as being there for Em I’m involved in the Mitsubishi Motors Cup. I’m doing a competitors course walk on Tuesday, joining them for their reception that evening, and doing the prize giving on Wednesday, in front of Badminton House after the main event’s vets inspection.

Here is a list of signings that I am doing through the week for various sponsors….. do come along to any, it would be lovely to meet you. There will be free cards and I will have my training book for sale at each stand.